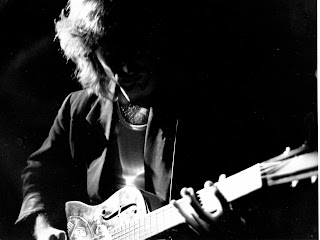 I’m in a one ton van with no lights, traveling north on an undivided highway, in a blizzard, on my way to Chapleau. It seems the lights have shorted out but we can’t stop because there isn’t anywhere to stop. If there was we wouldn’t have seen it anyway. Jabba is our driver and sound man. Jabba is driving at night in the dark, and he’s as high as a kite. We call him Jabba because he’s probably over 400 pounds. It’s his cube van, and his sound system, so we need him. We have a hole cut in the back of the cab area where the band members sit, so you can crawl into the cargo area of the van and sleep in a makeshift bunk area. As if it wasn’t already dangerous enough.
I’ve never been to Chapleau, in fact I’ve never heard of it. Turns out, it’s a small town which has been getting smaller for years. It’s around a couple thousand people and like most small northern Ontario towns, there’s two bars in town: the country bar and the rock bar. My band is playing the rock bar. The bar has recently been purchased by a young couple but is still being run by some crazy old guy. Surprisingly, we arrive in one piece Sunday night. The bar is typical, smells of stale beer with a jukebox in the corner playing bad eighties music. We go upstairs to check out our rooms. It’s more brutal than usual. Not only is there no lock on the door, the rooms no longer have doors. There are beds, but no sheets, no pillows. I turn on the water in the bathroom and the water shoots out of a broken pipe through a hole in the wall. Down the hall we see a crazy old guy come out of his room, the stench coming from the open door is surreal and unidentifiable. We ask the crazy old guy if he’s seen the owner, he says he hasn’t. Downstairs, about an hour later we’re introduced to the same crazy old guy, apparently he is the owner! I notice that he has a towel wrapped around his foot, no shoe, just a towel.

That night I sleep in my clothes, and boots with my winter coat on. It’s standard for me to pull a small table away from the wall and keep my suitcase closed and upright to help prevent anything from crawling into it, considering there was often wildlife in the rooms to content with. I dreaded taking home cockroaches to my parents home 800 km south in Toronto. Earlier in the mornings around 5 am, I’d walk out onto the roof and down the fire escape and take a long walk through the town. I’d come back later and see the guys in the band eating Quaker Harvest Crunch for breakfast. I’d take off and come back at lunch or dinner, they’d be in the room, still eating Quaker Harvest Crunch. Each morning I’d wake up to the sound of Kool And The Gang

’s song Cherish blasting away. I hated that song.

When we played the club, we had to set up in front of the stage and put our gear on the stage, it was just too tiny to hold a four piece band. After our first night (we were there for a full week) we had to rope off our stage area because the locals on the dance floor where so drunk that they would fall and land on our gear. The rope came out after our spare Music Man bass

was knocked over by a woman doing a header into it. We’d play three sets a night, usually by the second set the fights would break out in front of us, sometimes into a full out brawl. It wouldn’t be uncommon to see as many as three separate fights going on simultaneously in different areas of the bar. Occasionally, you’d hear someone at the back of the bar yell, “play something we know...”.

The band was well behaved, we were really just trying to get through the whole thing and get paid. On the road, you often heard folklore about young rock bands being chased to the town line by gun totting locals driving pick up trucks. We didn’t really drink much, not like the stories we’d hear from Jabba about more famous Canadian rockers he’d worked with over his years touring the bars. One blues rocker he called a “wheel out”, because each night after playing these dives, he’d drink so much Jack Daniel's that he’d have to be “wheeled out” of the venue.

After playing out the rest of the week, attending a couple local parties and generally surviving the bad food and the cold, we got ready to head home. Just as we were leaving we ran into the new owners of the club, and they told us what the smell was upstairs. Apparently, the crazy old guy had gangrene and could no longer fit his right shoe on, so instead he wrapped it in a towel.
Posted by Guitarplayyer at 10:06 AM No comments: