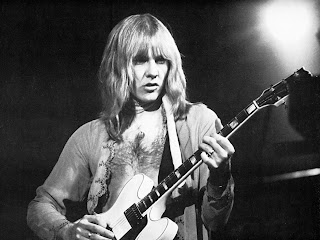 Exactly a year ago, I played my new solo album The Dead Arm for guitar hero and mentor Alex Lifeson. He liked it and mentioned that maybe we should consider doing something together in the future. I agreed.  He advised me to write a ton of music which we would then later sift through and pick the best tunes to develop. His other advice was to  include some other musicians to further develop the songs. I asked Sascha Tukatsch to play drums and Jason Farrar to play bass. We arranged the music and worked really hard on it. Their contributions and enthusiasm have been truly outstanding! After the Rush Time Machine tour ended and Big Al was rested, we went into his studio and recorded three tunes: Hollowbody, Sonar, and Disappearance. Rich Chycki engineered. Rich produced my first solo album back in 1995, everything I’ve learned about recording I’ve learned from Rich, I don’t think there’s anyone better. And Big Al’s approach to arranging, performance, and production was truly illuminating. We also had a lot of laughs in the studio, more than I can remember on any sessions I’ve ever done. We’ve finished these three and will release them soon, once we figure out the details. I just wanted to let everyone know that we’ve got some new music ready to be released and that we’re very excited about the whole thing!
Posted by Guitarplayyer at 11:01 PM